The National Assessment of Educational Progress (NAEP) released data from “The Nation’s Report Card” in October 2022 that showed negative impacts on student learning during the pandemic. While schools work to address learning shortfalls, there are far greater repercussions for students and the economy as addressed in a December, 2022 report written by Eric Hanushek, a Stanford University economist who specializes in education. 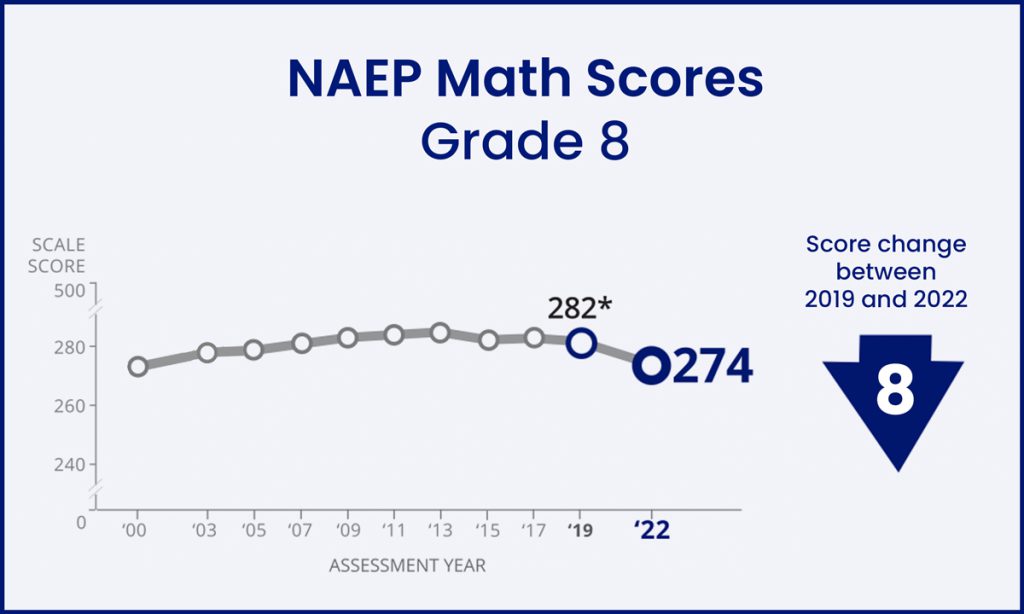 According to Hanushek, students who showed a decline in test scorings during the pandemic will, on average, face a 2 to 9 percent lower lifetime income depending upon the state where they attended school. Hanushek wrote, “By virtue of the lower-skilled future workforce, the states themselves are estimated to face a gross domestic product (GDP) that is 0.6 to 2.9 percent lower each year for the remainder of the twenty-first century compared to economic expectations derived from pre-pandemic years.” Hanushek reiterated that the economic value and future losses by state depends directly on the size of each state’s economy. The extreme example he outlined in his report estimated that a state like California could lose upwards of $1.3 trillion due to learning losses.*

Although the NAEP data showed direct evidence of learning loss for both 4th and 8th grade students from Spring 2019 through Spring of 2022, as demonstrated by lower math and reading scores, Hanushek’s economic analysis was only based upon 8th-grade performance. Hanushek wrote,”…this performance links directly to the economic analyses that provide information on future costs to individuals and the economy of the observed differences in student performance.”* Further reasoning for using this segment was based on the data which showed that across the nation, the average math score for 8th-graders fell in every state. When averaged together, combined declines in NAEP scores averaged 8 points.

Hanushek’s previous research (Hanushek et al. 2015)** demonstrated that students with higher achievement and greater cognitive skills earned more throughout their lifetime. His reasoning for this was that the United States tends to place a higher value on skills than other developed countries. On the flip side, his conclusions stated, “…the United States punishes those without skills more than other countries.”* Thus, his report summarized that the, “labor market value of skills implies that the average student during the pandemic will have 5.6 percent lower lifetime earnings.”

To summarize the economic impact on both schools and states, Hanushek’s analysis found that pre-pandemic, a total revenue for schools averaged 3.5 percent of a state’s GDP. However, given the learning losses during the pandemic, as proven by NAEP test scores, Hanushek estimates a continuing annual loss in GDP to equate to over half of schools’ annual budgets which included all state, local and federal funding. Each state’s economic loss would be dependent upon the amount of learning loss by students coupled with the size of that state’s economy.

The grim reality of such losses is that the damage has already been done. Hanushek wrote, “The existing evidence, although largely international, suggests that returning to the previous norm will leave the losses as permanent.”*  Data from a study done in Germany illustrates this point. In that study, researchers looked at the effects of student learning when the school calendar was adjusted, leaving a cohort of students with shortened school years. The effects of career income for these students showed these students made less income throughout their working lives (Cygan-Rehm 2022).*** While a study done in Argentina showed that long teacher strikes that occurred across provinces resulted in lower earnings for those in their thirties and forties for those who experienced longer strikes than those in less strike-prone provinces (Juame and Willen 2019).****

Hanushek concludes, “The losses cannot be pinned entirely on the schools, even if they contributed to them. But the responsibility for recovery for these losses necessarily falls on the schools.” Therefore, it is in the best interest of educators to continue to push local, state and government officials to continue to provide for and fund the necessary resources, such as individualized and high-dose tutoring to help struggling students make academic gains in order for them to attain a financial future they deserve.